New York in December was not as magical as I expected. There were a few decorations for Christmas but no were near what I had thought there would be.. The weather was just right but we did not get any snow while we were there.


Day 2 started out with a quick stop at the corner deli (Europan) for pastries and coffee, we actually ate there 3 times, the food was delish and the people were so nice and the prices were SO reasonable!! We had to eat on the run while taking the subway. It was a blast. 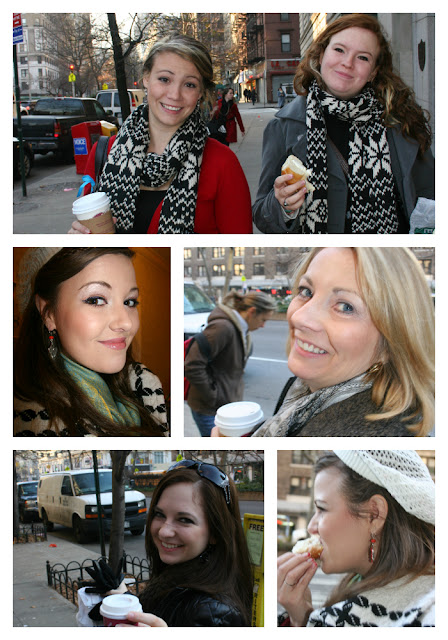 We had to hustle because we had morning tickets to see the Rockettes.
They had a Rockette in the lobby to take pictures with, we opted to go in together and get the digital package which included a terrific group shot of all of us, and when we got back to the hotel, the group shot was not on there, we never did get it resolved. But here are the individual ones we got: 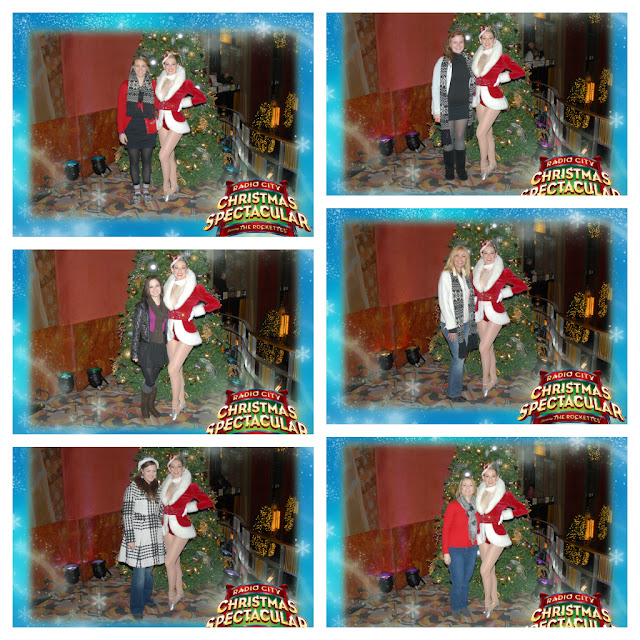 They were amazing, the costumes, story lines and dancing, all of it! Amazing!!! I am sure their normal one throughout the year is just as good, but there is something special about Christmas. I was so IMPRESSED that they included a manger scene, what a blessing that they were not concerned with being politically correct but that they included the true meaning of Christmas.
It was hard to get good pictures because of the bright lights, but take a look: 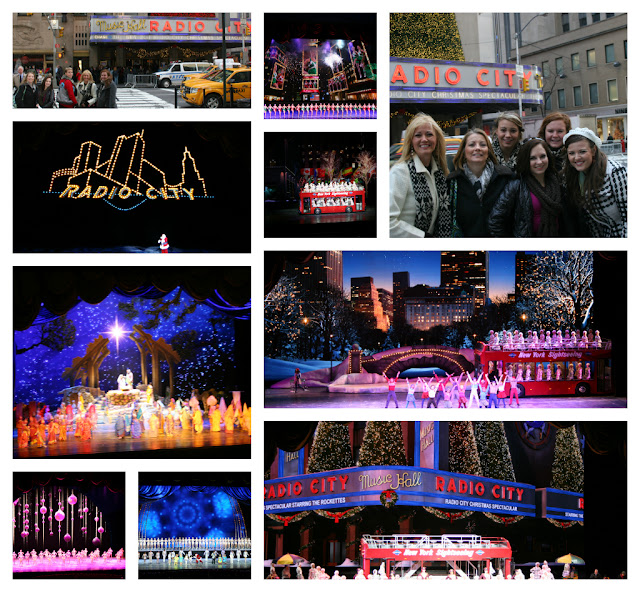 We did a bunch of site seeing that afternoon, 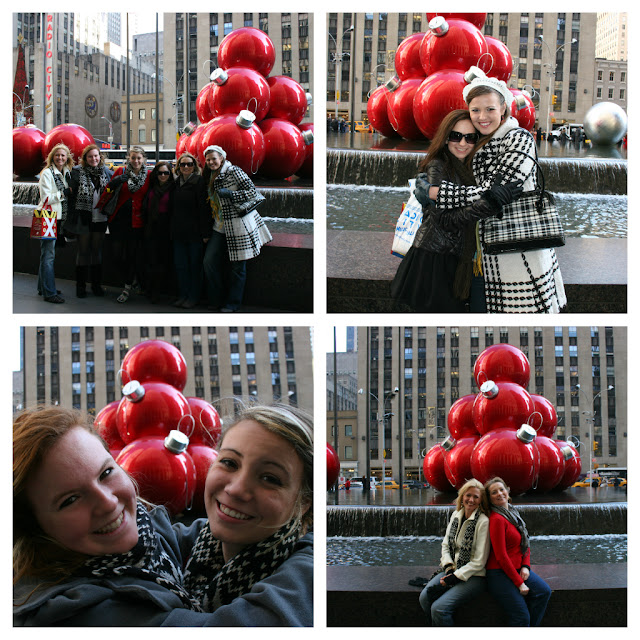 as well as, had lunch at The Stage Deli. The Stage Deli started in 1938 and since then has served some of the most famous stars of all time, including Marilyn Monroe, George Burns, Meryl Streep, Ben Stiller and more. Presidents have eaten there too!!  There are pictures all over, it is so neat to experience. There is typically a wait, but we lucked out. Alas, we did not see any stars but we did have the most hugest (yes that is a word, my word, don’t judge) sandwiches you ever saw. You can def share!! Abi and I had the Hugh Jackman, Erica and Jody had the Patrick Dempsey, Here is a sampling: 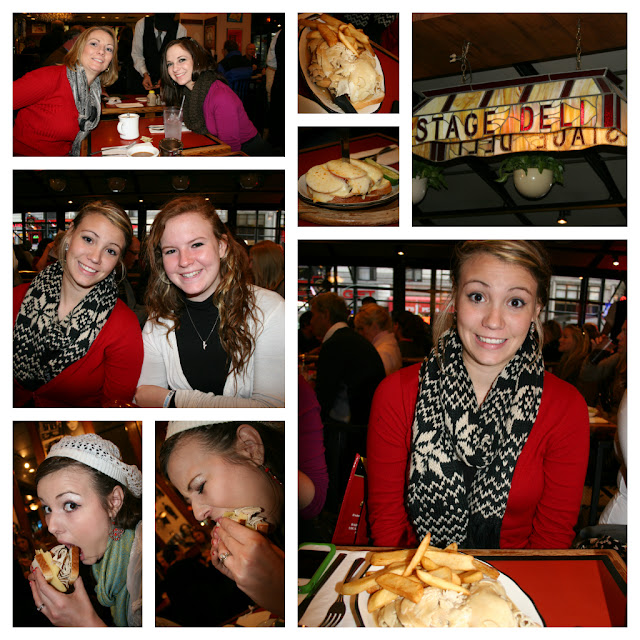 We took a quick run to Rockefeller Center, it was pretty crowded, but we got a few pictures 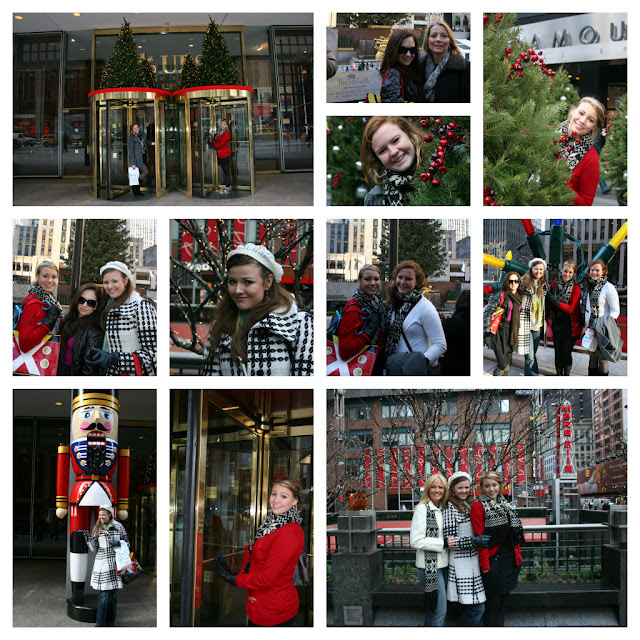 and went into the Met Shop for a few gifts. We saw some store fronts 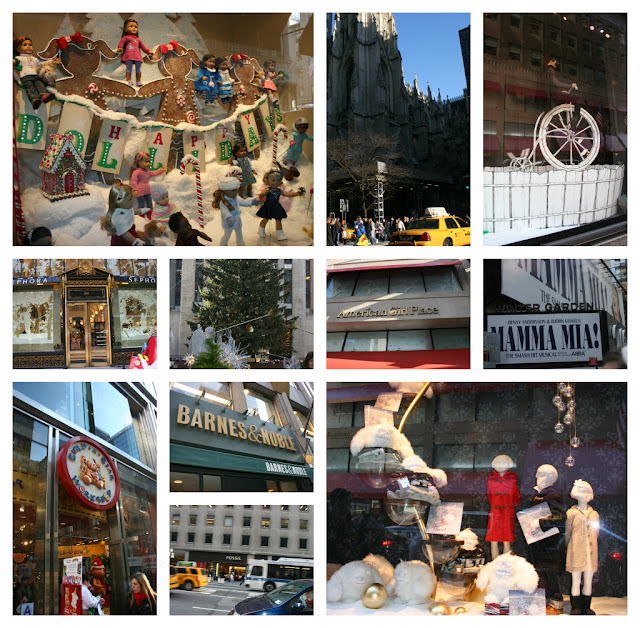 and then headed back to the hotel to get ready for another big night!!
Our BIG night was probably the BIGGEST surprise of all for Abi. It also turned out to be such a beautiful evening for us all. My sweet friend Michele was a costumer on Broadway and has met some beautiful people that she has made some incredible lifelong friends with.. One of them being a costumer for Wicked. Ms Alice was a character herself and we were so appreciative of all of her experience and knowledge, but most of all her time. We took Abi to the side stage door of the Gershwin Theater, told them we were there to see Alice and soon she appeared. I wish we had gotten a picture of her, she is the best!! As we could not take any pictures back stage, I will have to describe it to you. When the elevators opened we found ourselves off of the side of the stage and proceeded to walk center stage of the Gershwin, what a feeling! Abi had some tears at that point. Alice explained everything to us. The theater backstage is every small and they make use of every inch of space. Things rolled out, roll up and down, you would never know from the amazing show that everything is so tight backstage. She took us UNDER the stage where the orchestra is and it too is so very small… Then she took us into the dressing rooms and to the main costuming areas. She let us hold a couple of the gowns which weighted a ton! We also viewed one of the most expensive to make, which totals out at about $40,000. For ONE costume!! And we wonder why Broadway Shows are so expensive! They are not cheap to put on!!! Everything has to be just precise, Oz is a very odd land and everything from the costumes to the hats to the shoes, must fit that persona. The tour took us about an hour or so and was just so interesting, I think I could have spent all day there!!!
When we arrived in the lobby, there was the cutest group of ladies there who all had red shoes on, darling!!
The play was mesmerizing and we did not want it to be over. It was the best seeing it after the tour, we knew the ends and outs and what all it takes to put it on. We had also heard that the stars come out after, this time there was maybe 10 of us and after a bit of a wait (I am sure it takes time to get out of the costumes and makeup).. Boy did they come out and everyone was SO nice. They were in NO hurry and actually asked questions about us!! What a delightful cast. We could not have been more excited with the experience. THANK YOU Michele, THANK YOU Ms Alice and THANK YOU Wicked!! 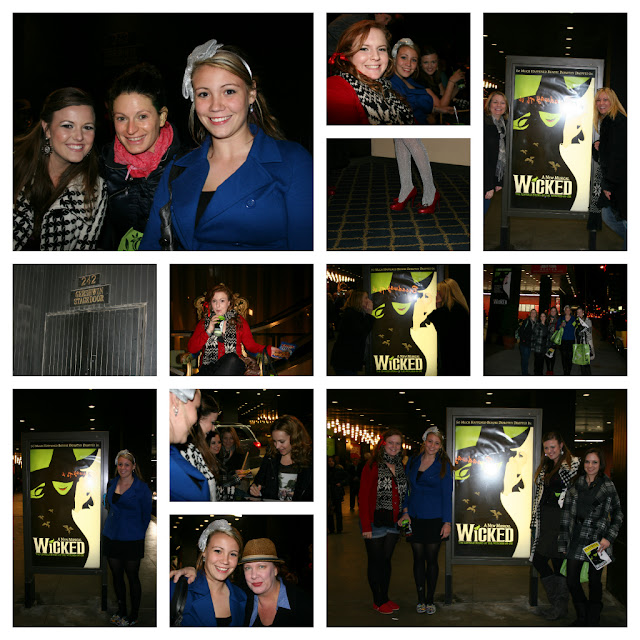 So that sums up our 2nd day, we were so tired after and were ready to head back, after a little shopping of course…… Until tomorrow…….
Peace, Love and EnJoy!!!